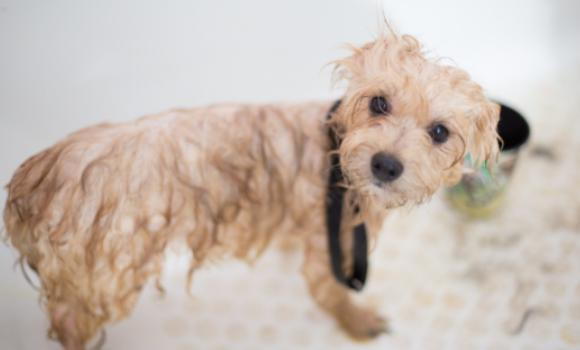 One concern we hear from clients about their furry ones is often to do with a bad odor developing. It is important to know what types of odors are normal and natural (ie puppy breath in a teething little one) versus abnormal odors that can indicate a problem (such as ear infection or skin infection).

Dogs and cats naturally produce secretions that enable other animals to recognize them by smell. Unfortunately, people do not always appreciate these odors! Natural odors are most prominent near the anus, near the ears, and around the footpads.

Sweat glands: Dogs and cats do not produce sweat to cool off. However, they do have sweat glands associated with each group of hairs. These glands likely produce pheromones, or chemical signals, for communication with other pets. They also have another type of sweat glands on the pads of their paws and on their noses, which help keep these areas moist and functioning properly. On the paw pads, natural micro-organisms live in the surface layers and contribute to the paw’s typical odor – like cheese puff snacks or chips. This odor is much more noticeable on pets with moist paw pads than on those with dry pads.

Poor grooming: A coat that is not kept clean and groomed can trap dirt and other substances with unpleasant odors. Be sure to keep up with your pets regular grooming and bathing needs.

Skin diseases: Pets with allergies may have a musty odor because allergies which can lead to secondary bacterial and yeast skin infections. Pets with deep skin folds (bulldogs, pugs, boston terriers, Persian cats), are also more prone to bacterial and fungal infections as the fold areas tend to stay damp and dark.

Ear diseases: Ear infections, also called otitis, are a common source of odor in dogs and cats. The smell from the ear will often be yeasty or actually smell like sewage. A slight odor can be noted in normal ears of some pets.

Skunks: Skunks and pets don’t mix well and a dog or cat may be sprayed in the encounter. This results in an over-powering musky acrid odor that remains apparent in the 'skunked' pet’s coat for many days or even weeks until steps are taken to neutralize the odor. These odors are best treated at home or a grooming facility. Eyes can be flushed with sterile saline eyedrops. Pets can be bathed with a mixture of baking soda, hydrogen peroxide and dish soap for best results. Multiple baths over several weeks will usually be required.

If your pet is omitting an unnatural odor—give us a call. A doctor’s check-up may be in order to get to the root of the offending problem.